Made It Moment: Stefanie Pintoff

I discovered Stefanie’s novel In the Shadow of Gotham via this mystery listserv I’m part of. The listserv is always leading me to real treasures, and Stefanie’s was one of the biggest and brightest. It is a moody, atmospheric story of old New York. Stefanie manages to weave elements as disparate as feminism, mathematics, and murder into one spellbinding tale. This novel is literally a winner, as she is about to tell you…

When I was outside the business looking in – with no agent, no editor, no publishing contract, only a dream that I’d like to write a book – I thought that making it as a writer meant one thing.

After all, to be published was the ultimate validation of one’s work.

Then I was lucky.  I took the Cinderella route to publication when I won the inaugural Mystery Writers of America / St. Martin’s Minotaur Best First Crime Novel Contest.  Given how hard it is for a new writer to get the attention of first an agent, then an editor, the contest offered an amazing opportunity for an unpublished writer.  When I got the phone call letting me know I’d won, I spent one glorious day basking in my success:  I was going to be published by a leading mystery imprint; my editor was terrific, at the top of her field; and the contest win put me in the company of very talented writers who’d won similar St. Martin’s-sponsored contests, including Steve Hamilton and Michael Koryta, Donna Andrews and Julia Spencer-Fleming.

The next day, reality hit.  I was going to be a published writer.  And that suddenly meant something very different than it had only a day before.  I had a tremendous amount of work ahead of me as I confronted new issues large and small.  I learned what my publishing house and editor expected; how to promote; and how to create realistic goals to move my career forward.  I also learned how much was beyond my control as I embarked on the beginning of this new career.

Now my book sits on bookshelves across the country, and I still sometimes pinch myself to make sure it’s real.  I’ve passed one major hurdle, but there are plenty of challenges ahead.  To “make it,” I’ll need more of the luck – and hard work – that got my writing published in the first place.

Still, I’m reminded every day why I do this.

The blank page before me – though it’s unknown and mysterious, sometimes terrifying – is also reassuring.  It holds out the promise of what I crave most:  unlimited possibility.

Stefanie was thrilled to have her book launch at the wonderful Partners & Crime in New York, and sent along a picture of the occasion: 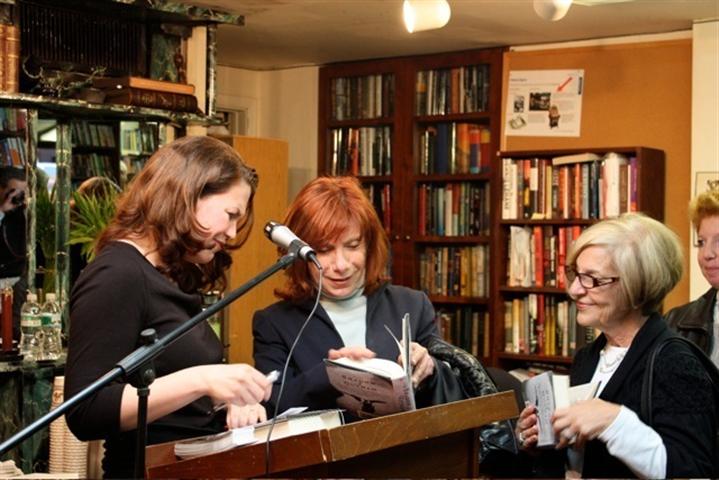