Sorry for the silence. For the past two and a half weeks, we were traveling in the wilds of Maine.

Well, maybe not the wilds. Not the stumbling-through-the-woods-and-ending-up-in-Canada (or dead) wilds. But we did spend two weeks in the lovely and desolate town of Presque Isle, before slowly wending our way south again.

We’ve been going to this town for about six and a half years now, ever since I was pregnant with my first child. My husband’s company has an office there, and we try not to split up for business trips, so I used to tag along and we stayed at a B&B instead of the convention center near his office. Now having little kids attached to our traveling troupe, we’ve switched our sights to a beautiful campground with a rental house that suits us just fine.

It’s funny how a place can change, even one that seems in some (delightful) ways to be stuck in time.

Back when we were first going up there, if you wanted a meal out there was a staggering array of fast food to choose from, and the darkest lettuce you could get was iceberg.

I don’t know if it’s things moving in a certain direction–pretty much everywhere puts mesclun greens on the salad these days–or us getting to be the teensiest bit more like locals–minus the five month, negative forty degree winters, of course–and discovering hidden spots, or a combination of the two, but we found our way to some really special things this trip. 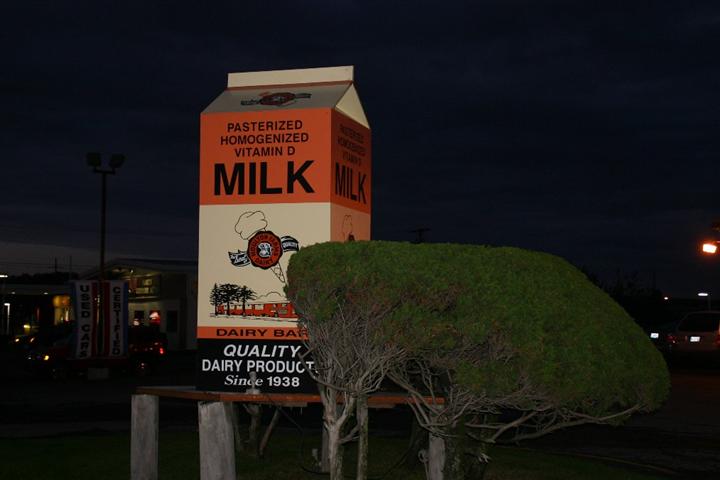 The Dairy makes its own ice cream and when we arrived during berry season, this included raspberry with actual pieces of fruit, and a delectable, tart taste. They make homemade sundae toppings like peanut butter hot fudge, and put toasted nuts on every one. They whip their own cream, man!

If you stay at the campground, you can take a kayaking trip down the river right out front, and watch bald eagles circling for minutes at a time. The cost is absurdly low compared to trips further south, and the excellently kept two person kayaks are perfect for a child’s first paddling trip.

The nested array of ATV trails are fun if you’re into off roading, but also perfect for long walks amongst vast fields bordered by woods. It’s not the same as hiking up a mountain. There’s no press to get somewhere, to summit or achieve a view. The view is all around you, all the time. You can simply wander, and that’s something that people in places like Presque Isle seem to be better at than, say, New York.

Cafe Sorpreso has come to PI and brought with it homemade soups, sandwiches, and dinner entrees like steak with a sauce of roquefort, cabernet, and shallots. Is there a tension between roquefort sauce and rice krispie treats? We like eating pizza as much as steak and so were happy to find Rosella’s, which also serves a regional specialty, deep fried pickles. But I wonder what will happen to this town, carving out its existence in a valley near New Brunswick, Canada, if restaurants with heavy cutlery and unusually shaped dishes keep migrating to it.

I hope one thing won’t change, and that’s the people of PI. Not only are they friendly and wonderful to us out-of-towners, but they seem to have a startling propensity to stay, generation to generation, in this admittedly tough place to live. (The winters really do hover at forty below for spells.) And that produces something that I thought was becoming lost in this rapidly changing, mesclun green eating world.