Made It Moment: Carl Brookins

I was very pleased when author Carl Brookins wrote me because I’ve long enjoyed his posts on listservs such as the great DorothyL. Carl always has an interesting, no-nonsense viewpoint, and his approach to making it in this business reflects the same. Plus, Carl’s Moment brings in some ways the best thing of all–an undiscovered body of work yet to read! 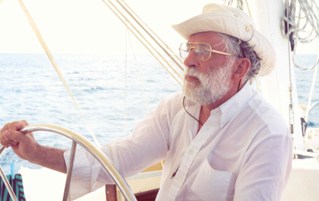 I always knew I’d be a writer. Then I sold my first piece of writing. That was more than 60 years ago when I was in the seventh grade. I wrote a short story to submit to a pulp magazine that featured only western tales. I had never been west of the Missouri and had yet to discover Louis L’Amour or the other western writers, except for Jack London. But I did know the Hardy Boys and Nancy Drew. Imagine my delight when the magazine sent me 50 cents for the story!

Writing, fiction and non-fiction has always been a major part of my life. In high school I discovered that writing essays was better for me than short answer or multiple-choice tests. Every job I’ve held since high school has included a writing component of larger or lesser degree.

So, I’ve had many “made it” moments. One occurred when a piece I wrote on driving safety was published, without a word being changed, in the Triple A magazine. Another occurred when my first script for a televisions series I later produced was accepted for production. I knew I’d “made it” again when an international magazine aimed at professional broadcasters accepted my article on the founding and development of the tiny public television station in Fargo, North Dakota, a station I headed at the time.

My fiction writing career began when I made it as the author of “Inner Passages,” my first sailing adventure story, from Top Publications and again with my latest in that series, “Devils Island.” That novel is particularly satisfying because it represents the evolution of perhaps my strongest character, Mary Whitney, a bright, resourceful woman of charm and grace, with the athletic and mental skills to deal with her powerful but deranged ex-husband.

But you know, I’ll have the satisfaction again of having made it this far with the publication of my next novel or short story, or article. I’m a work in progress and I’m having a lot of fun getting there.

I’ve had many jobs, all related in some way to public communication. They include highway safety, public television, cable television and higher education. I love writing and almost everything that goes with it, including revising! I live in a suburb of the Twin Cities of Minnesota with my wife, a retired publisher. I’m a member of Sisters In Crime, Mystery Writers of America, Private Eye Writers, and Minnesota Crime Wave.