Made It Moment: B.G. Bernstein 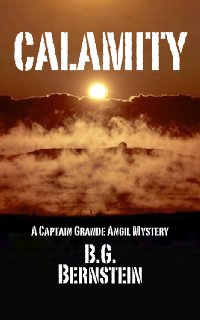 Reading Bob Bernstein’s Moment was something of a shock and a smile for me because, although much of it takes place in the screenwriting world, the process is just like trying to break into big publishing. The near-misses. The almost-rights. The need to write new works if you want to stay in the game–before you’re even really in the game–so that by the end we have eight novels written before we ever get published! Ooops, sorry. That was me. In Bob’s case, I think it was nine scripts.

This is a fascinating look into the ways major media work from someone who can actually call Nicolas Cage ‘Nic’. (I find that very cool). And it’s also a look at what’s happening to publishing today. The indie movement–and I call it a movement deliberately–is about finding ways to showcase talent that might’ve gone undiscovered. Anyone who got as close as many times as this Moment-er did is clearly talented. I’m so glad he found his path. And I think you will be, too.

I don’t feel as if my moment, my real moment, has arrived. I’ve been writing for about twenty-five years, fifteen of those as a technical magazine writer specializing in maritime subjects. It was something I started to supplement my income from my real job, that of owner-operator of an eco-tour, dive, sport and commercial fishing boat. It happened thus: After one particularly lean winter of scalloping, I wrote a story about swimming with humpback whales in Cape Cod Bay. I sent the story to a regional magazine and to my utter astonishment got back a check in the mail. With the check came a written request for more material.

It was a “moment” for sure. Getting that first check in the mail. However, five years of punching out features, columns, editorials and other magazine content wore the fun-lovin’ spirit of the process right out of this writer’s brain pan. I continued my relationship with the magazine publishing world for several more years but something was definitely missing, something I needed to do to satisfy the writing lust. That “something” turned out to be screenwriting.

As any Oscar award winning wannabe knows, screenwriting is not for the weak hearted or thin skinned. I’m pretty sure Joe Esterhaus will back me up on this.

My first screenplay will never ever see the light of day again. No one will ever read it. No one ever has. It’s that bad.

My second screenplay made it all the way to Tony Bill. My third screenplay was optioned and went on a tour of the creative rooms of Hollywood for several years. Number four made the top twenty-five scripts in the 1998 AMPAS Nicholl Fellowships, the Academy award for unproduced screenwriters. The fifth screenplay almost found a home with George Clooney’s first film company. Six was a dud. Seven had Nic Cage interested. Eight made it up the ladder at Amblin Entertainment. Nine is still in my desk and ten and eleven are in my head.

There were definitive “moments” during that screenplay-writing foray, getting the recognition from the Nicholl and being a few steps away from great talent like George Clooney and Steven Spielberg, to name two. But in the end, the great grinding gears of the industry wormed a hole through my resolve. I said to myself, “Phew, so close and yet so far. There must be a better way.”

And there is: Novel writing.

I just finished and self-published my first novel. I had written short stories and novellas and had seen both published in magazines, but writing a novel is different. In a nutshell–and this may come as a huge shock to people–there are a lot more freakin’ words in a novel.

Just finishing the novel was a “moment.” But the bigger “moment” came about a month later. I had sent the novel to a respected editor and close friend. He sat with it for about a week and kept apologizing for not having the time to read it. I told him it was no biggie, nothing to worry about. And then one morning I called him about something else and he said he couldn’t talk because he was about forty pages from the end of my book. I said, “I thought you didn’t have time to read it.” And he answered, “I started it this morning. I’ll talk to you later.”

Huge “moment” for me.

Have I made it? I hope not. I’m not sure I ever want to feel as if I’ve made it. Because then what happens? Will I still have the drive to want to “make it” further?

And what about screenwriting? Have I left it for novel writing?

Apparently not. Just last night I entered into an agreement with a fabulous author and an Oscar-nominated producer. I’ll be writing the pilot for a TV show that we hope to be pitching in four to six months.

Robert G. Bernstein, a.k.a. “B.G.” is a former executive fundraiser turned professional boat captain. He has worked as a commercial fisherman, charter boat captain and captain-for-hire for over thirty years. His technical marine articles and short stories have appeared in magazines and books.

The novellas, Beneath Cold Seas and Mother Lode – first serialized in Offshore Magazine in 1992 – are now available at Amazon’s Kindle Store, as is Bernstein’s memoir, What They Don’t Tell You About Alzheimer’s, about taking care of a mother with Alzheimer’s Disease, which held the top two spots on Amazon’s Top 100 Kindle Books on Aging for over seven weeks and rose to the top 25 on Amazon’s Top Ten 100 Memoirs.

Mr. Bernstein’s first novel, Calamity, about a financially burdened Maine captain who finds himself in way over his head as a private investigator, has just been released.