Made It Moment: Barbara Ebel 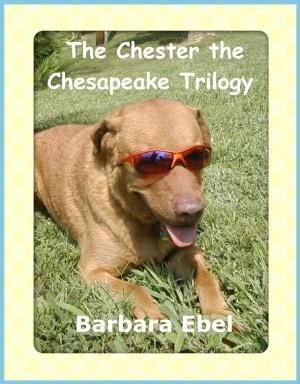 You don’t have to like dogs to like this Moment, but come on…who wouldn’t love a face like that?? (Chester’s, although Doc Barbara is a pretty lady, too).

I love hearing how writers come to their careers by incorporating other passions. In Doc’s case, it was her love of dogs, whom she trained as therapy pets. But as you can tell from her nickname, Doc also has a medical background. Fans of Robin Cook and his ilk would do well to check out Doc’s back list. But first read about Chester. How can you resist?? 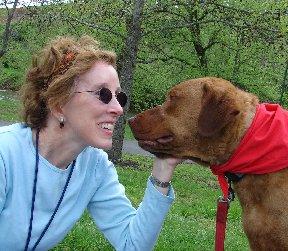 When I first moved to Tennessee seven years ago, I had already been vigorously writing adult novels. Up to that time, I had been known as Doctor Ebel in the places and practices I had lived and worked, but in TN, my medical career became secondary.

One of my interests is raising and training dogs. I started working my Chesapeake Bay Retriever therapy dog in the region at nursing homes and schools and he started to take on a special place in people’s hearts. Along with that, the philanthropic woman lugging the dog around went from Doctor Ebel, a woman sometimes saving lives as an anesthesiologist, to “Doctor Barbara” or “Chester’s Mom.”

One day after a few queries were thrown my way and people learned I was an author, this remark resonated loudly: “Since you’re already an author, why don’t you write a children’s book about Chester? The kids already love him so!”

So, you know what’s coming. I did. I also took hundreds of pictures of the dogs, made the stories nonfiction with real photos, and wrote it from Chester’s point of view.

But here’s the endearing part where I made it first. After Chester the Chesapeake got into people’s hands, another question was posed to me: “When’s the next one?”

Well, my adult books with medicine sprinkled into the background of their plots have subsequently gotten their day in the sun, but now Chester has three!

So I guess this writer who is buried in a natural wildlife corridor writing mostly adult novels, has made it, but it’s Chester, my Chesapeake, who’s the celebrity. As it should be.

Barbara Ebel, M.D. is an anesthesiologist-turned-author who spreads pet therapy through middle Tennessee. Chester and her dog books are featured at dogbooksforchildren.weebly.com.

Doctor Barbara also writes adult medical genre novels and self-help. Her romantic suspense is Operation Neurosurgeon: You never know…who’s in the OR; her lengthy general fiction is Outcome, A Novel: There’s more than a hurricane coming…, and her book for healthy living is Younger Next Decade: After Fifty, the Transitional Decade, and What You Need to Know.

Barbara lives with her husband and pets in a protected wildlife corridor in Tennessee and continues to be a medical guest lecturer.