Made It Moment III: Douglas Corleone 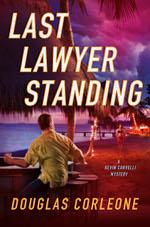 I started sharing Made It Moments by authors for one simple, selfish reason. I needed inspiration to keep going in my own struggle to become a writer. Listening to the moments of joy that other writers had found gave me happiness of my own, and also convinced me that happiness can be found in this pursuit of ours. If I’ve learned one thing from the Made It Moments forum, it’s that joy as a writer comes in as many different forms as there are authors out there.

Doug Corleone is one author whose evolution I’ve followed, cheering all the way. And it’s been quite a way–Doug is the only Moment-er to have shared three Moments. His first appears here; and his second here

And today with the release of Doug’s third (and last in the series) Kevin Corvelli legal thriller, we learn what makes for making it–the third time around. Congratulations, Doug, and thank you…for the inspiration.

With the release of my third novel Last Lawyer Standing, I’ve officially made it – through another year. With every passing week, I realize more and more that writing novels is just like any other job (except we don’t have a dress code). We have to show up every day to write and revise and promote. We have people to impress – our agents, our editors, our critics, and most importantly, our readers. Think it’s tough to have two or three supervisors? Try having several thousand, each of them holding a piece of your future in their hands.

Before my first novel, One Man’s Paradise, was published by Minotaur Books in 2010, I was sure that publication would lead to at least some kind of job security. But with the industry in a constant state of transition, a novelist’s job is only as secure as his next contract. That’s frightening – but it also keeps us on our toes and hopefully keeps us at our best.

My greatest challenge over the past year has been leaving the comfort of the Kevin Corvelli series of legal mysteries and entering the unfamiliar world of international thrillers. In a way, it was like being moved to a different department within a corporation. I had to introduce myself to an entire community of new characters, learn new skills, and face the challenges that come with navigating new territories.

With the release of Last Lawyer Standing, I’ll also be leaving behind old friends. Ending a series can feel a lot like moving away from your hometown. The bittersweet sense of closure combined with the adrenaline rush that comes with opening a new chapter in your life creates a batch of mixed feelings that can be tough to sort out. Writers of fiction spend their entire lives trying to create inner conflict, but when we finally have to face it ourselves, we can feel woefully unprepared.

Over the course of three years and three novels, I have changed every bit as much as my main character. Maybe more. While Kevin Corvelli faced tough juries, unscrupulous prosecutors, and killers who would stop at nothing to hide the truth, I quit the law, became a father of two, and made Hawaii my permanent home. While Kevin Corvelli’s story comes to a close in the final chapters of the trilogy, mine is simply moving in a very different direction – one that I can only hope will be as challenging and as satisfying as the last.

Douglas Corleone is the author of the Kevin Corvelli crime novels set in Hawaii, including ONE MAN’S PARADISE, a finalist for the 2010 Shamus Award for Best First Novel and winner of the Minotaur Books/Mystery Writers of America First Crime Novel Award.

A former New York City criminal defense attorney, Corleone now resides in the Hawaiian Islands where he is at work on his next novel.