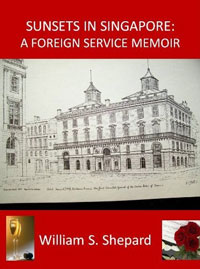 We all know about the rise and crest of the vampire trend. Starting with Bram Stoker, moving onto Anne Rice and Stephanie Meyer, and I’m probably missing oh, a few hundred or so. Today as a Halloween treat, I have a genuine tale from the land of Dracula, from a writer who used his diplomacy background to begin a whole new genre. Nope, it’s not a vampire spinoff. But I think you will be intrigued by his books…

Happy Halloween! And if for you as for us, Storm Sandy postponed the candy collection, please let me know in a comment what you’ll be doing instead. 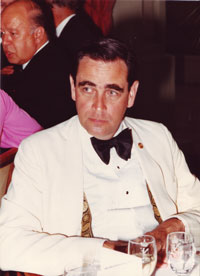 It was Halloween, October 31, 1970, and there I was, driving with my family from Budapest to Transylvania, Romania. We associated that wild land with horror movies from the 1930s, starring Bela Lugosi and perhaps Peter Lorre (both Hungarians from that region). My wife  had thoughtfully stocked up on “real” Halloween candy at the nearest US Army PX in Germany before our trip. Our daughter Stephanie was 8, her sister Robin was 7, and Warren, their brother, was four years old. We were assigned to the American Embassy in Budapest, and I had obtained Romanian visas for our weekend Halloween visit to the land of Dracula!

On the way, we all told stories. Just before the Romanian border we noticed a large cemetery, just right for inducing that Halloween feeling. We drove across the border, and through storied towns such as Kolozsvar (Cluj to Romanians). As we passed into this wildly scenic region, I remembered the opening of The Wolf Man, as a haunted Lon Chaney, tending an ox cart, wondered at the full moon and its career implications for him. Eventually we arrived at Timişoara, the main city in the western Romanian Banat region. It was also the location of Huniade (Hunjadi) Castle, a royal Hungarian residence that served as an inspiration, along with Bran and Oradea castles, to writer Bram Stoker when he wrote Dracula.

We checked into our hotel. There was just time enough to visit the castle before closing time. To show us how different our cultures were, on Halloween as the darkness loomed there were no children in costume, and no other visitors to the famous, forbidding castle, a fifteenth century gloomy pile with the spookiest squeaky swinging gates I’ve ever heard. Our family was the last group for the day, and we saw the tower, the great hall, the courtyard and the dungeon. The dungeon created the greatest impression, with massive walls and hopeless aspect, and a massive oaken door leading below that creaked in a solemn drone that I can still hear.

As we left the castle to rerun to our hotel, I asked the guide if there was anything to the Dracula legend. He  looked at our children, smiled and said as he closed the door, that of course there was nothing to it, provided one was safely back in the hotel room before the darkness fell. We all raced across the streets back to our hotel. The children woke up the next morning to Halloween candies and decorations, and rich stories to tell their classmates on Monday.

And as we passed the Hungarian frontier on Sunday afternoon I glanced at the cemetery we had seen earlier. There were many people there, and every grave had flowers. It was traditional All Souls Day and the people were remembering their loved ones, communist government or not. The weekend became part of my recent Ebook, “Sunsets In Singapore: A Foreign Service Memoir,” for we had all experienced in Transylvania the power and lure of storytelling…

Prize winning mystery writer William S. Shepard is the creator of a new genre, the diplomatic mystery, whose plots are set in American Embassies overseas. This mirrors Shepard’s own career in the Foreign Service of the United States.

His diplomatic mystery books explore the insider look into the world of high stakes diplomacy and government. The first four books in the series are available as Ebooks. Shepard evokes his last Foreign Service post, Consul General in Bordeaux, in Vintage Murder, the first of the series of four “diplomatic mysteries.” The second, Murder On The Danube, mines his knowledge of Hungary and the 1956 Revolution. In Murder In Dordogne Robbie Cutler and his bride Sylvie are just married, but their honeymoon in the scenic southwest of France is interrupted by murders.