Made It Moment: Douglas Wynne 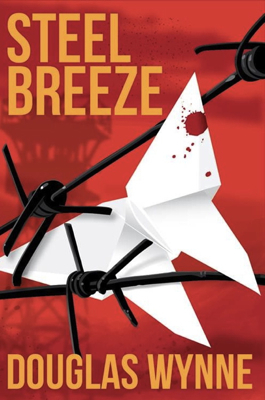 Doug Wynne has one of the best lines I’ve ever read about books in this Moment–it’s like something Stephen King could’ve put in ON WRITING–but it was the photo of Doug before an event that jumped out at me even before I’d had a chance to find that pearl. As many of you know, I’ve done, um, a few events over the past six months. And that blend of hope and excitement and of course a tad of trepidation, not to mention the expression that says, Man, do I really get to do this? on Doug’s face struck me as exactly how I feel every single time.

I think every reader and writer will find a piece of themselves in Doug’s Moment to come. Parents, dreamers, hopers, seekers. Now well into my own debut year, spent living on the road, I am thrilled to hearken back the Made It Moments forum with this one. 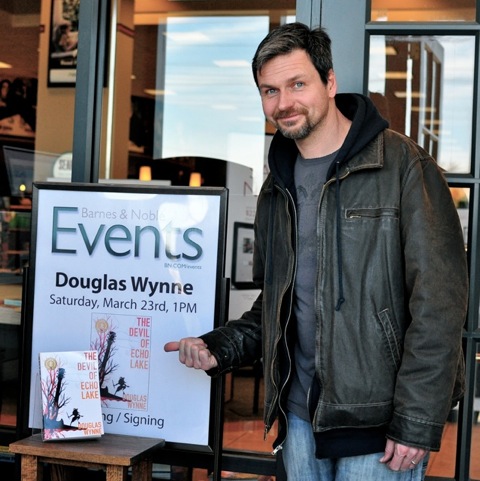 Like many of the writers who’ve appeared in this space, my first reaction to the question is: I haven’t. I’m published by a small press, and I’m in no danger of landing in a different tax bracket anytime soon because of book sales. But I have enjoyed some thrilling moments over the past year, which saw the publication of my first book in October of 2012, followed by my second this month. Since no single event stands out as the defining moment, I started this post by making a list of the highlights, figuring that I’d pick one to write about.

Was it the moment when I got off the phone with the man who said he wanted to publish my first novel, told my wife the news, and felt her jump into my arms in the hallway of our apartment? Definitely a contender. Or how about ripping the shipping paper off of the first ARC of that book when it came in the mail, and seeing the gorgeous cover for the first time in print? Also a big thrill. Could it have been the time I opened an email from my in-laws to find the first photo of the book “in the wild” on a bookstore shelf, or reading good reviews of it in Publisher’s Weekly and Library Journal? Maybe it was meeting a couple of fans at a Barnes & Noble signing event and discovering that they had come out to buy signed copies of a book they’d already read for free through Library Thing just because they liked it that much. One of them even wanted me to sign his iPad cover because he’d read it as an e-book first. How’s that for a Made It Moment?

The truth is…each of those little triumphs was mixed with the anxiety that my moment as a writer might not live up to its full potential, or might not last. I doubt we’d be compelled to write books in the first place if we weren’t sort of ambitious and restless types, always dreaming and looking to the horizon, but I tend to agree with most of what Buddha had to say about the suffering that comes with desire and attachment, even if I don’t always take his advice.

When you get published, you start worrying about earning out your advance. When you score that cool bookstore gig, you worry that not enough people will show up. When you get a good review, you wish for a rave review, a starred review.

So I’m grateful to Jenny for getting me to make that list because it distills the past year and reminds me of all the awesome support I’ve enjoyed from my publisher, my bookstores, my friends, family, and readers.

I wrote the first draft of Steel Breeze before The Devil of Echo Lake found a publisher. I wrote it without being self-conscious, and I wrote it thinking that it might be the first thing I’d get published if Echo Lake didn’t sell.

I wrote from the heart about the things that scare me most: the prospect of losing my child, or of him being in danger, the possibilities of losing my wife or my freedom. In other words, I wrote about the things that are far more important to me than books and whether or not I’m “making it.” And in the process I also had some things to say about war and tribal karma and the cyclical nature of violence. My main intention was to tell a thrilling story, but my concerns about the human race are written between the lines, and let me tell you—those fears are bigger than the fear of bad reviews and poor sales. And writing about them is therapeutic. If I didn’t write about my fears, they’d just be banging around my head keeping me awake at night.

As I write this post it’s a busy week around our house with the book coming out this weekend, and my five-year-old son catches wind of that. Right now he’s a big Harry Potter fan, but a few days ago he asked me, “Daddy, will your books be around when I grow up? Because I’d like to buy them someday and read them. Will they still have Steel Breeze at the bookstore?”

It hit my heart in a cool way to hear him ask that, and I told him, “Well, I hope so, but don’t worry, I’m saving copies for you.”

And that is the magic of books. They’re vehicles for sharing our most personal insights, our fears and dreams, with other people across space and time. That’s why we write. Not for money or fame. When you write a book and send it out into the word, you have no idea whom it will reach or when. No idea what will come of your story living for a while in the mind of another.

Books may be products, but novels are shared dreams. Sometimes they’re shared nightmares, but don’t you feel better when you have someone to share a nightmare with?

My Made It Moment came last night when I walked into one of the local bookstores hosting my release events and saw the copies of Steel Breeze they had in the window. I’d already seen advance review copies at the World Horror Convention, but because of some last minute changes, this was the first time I held a final copy of the book in my hands. As I flipped it open to the page where it’s dedicated to my son, I remembered him telling me that he’d like to read it someday, and I thought, “I made this. With the help of some great people, I made it.”

Douglas Wynne is the author of the rock n roll horror novel The Devil of Echo Lake, which was a first place winner of JournalStone’s 2012 Horror Fiction contest. His second novel, Steel Breeze, is a crime thriller about a modern day samurai serial killer. He lives in Massachusetts with his wife and son and spends most of his time hanging out with a pack of dogs when he isn’t writing, playing guitar, or swinging a sword.