Made It Moment: Kristi Belcamino 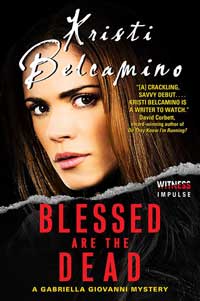 One of the cool kids. How many writers, I wonder, felt like we were never that? Recently I got to meet on the road a woman–except for me she will always be a girl–I grew up with. She said something about me still being funny and articulate, just like she remembered me. And I thought, THAT’S how you remember me? Cause it’s not how I remember myself.

Kristi Belcamino details quite a few moments below, and I’d like to point to another one for her, which is that Kristi’s debut novel has just released! Celebrate with us by reading BLESSED ARE THE DEAD (some title, huh?) and get to know a new writer right at the start. Kristi…welcome to the cool kids. 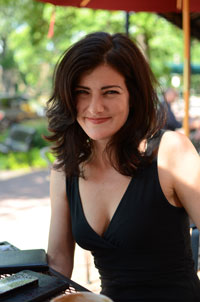 When you are a writer, your idols are, well, other writers.

So, my Made it Moment was when the doors to this magical kingdom of writers—specifically the most warm and welcoming community out there, that of mystery writers—opened wide for me.

Now, I’ve had plenty of brushes with fame in my time—as a reporter I met Edward James Olmos, Dennis Hopper, Jerry Seinfeld, Clint Eastwood, and Reggie Jackson. In addition, I’ve shaken President Clinton’s hand, had Eddie Van Halen bump into me at a party, and lived with the musician Beck and his family in L.A.. But the people who really make me swoon with fangirlishness are other writers!

I knew I had somewhat made it when I began hobnobbing with the kick butt writers I liked to read. (Ask my Facebook friends how much I freak out if S.E. Hinton replies to one of my tweets —she’s done so four times and I’ve about lost my mind EVERY TIME.)

Here are a few of those moments:

So, my Made it Moment (s) are realizing that these rock star writers are in some cases my peers and in a few, very lucky case, my friends.

I’ve realized that I can’t control how my book sells — at this point all of that is out of my hands—but no matter what happens with sales, getting a book deal has granted me entrance into one of the most welcoming, warmest, and most supportive bunch of people out there. I will always be grateful to these other writers, who have opened their arms to me and made me feel like I’m one of the cool kids.

Kristi Belcamino is a writer, artist and crime reporter who also bakes a tasty biscotti. Her first novel, “Blessed are the Dead,” (HarperCollins June 2014) is inspired by her dealings with a serial killer during her life as a Bay Area crime reporter. As an award-winning crime reporter at newspapers in California, she flew over Big Sur in an FA-18 jet with the Blue Angels, raced a Dodge Viper at Laguna Seca, and watched autopsies.