Made It Moment: Eric Keith 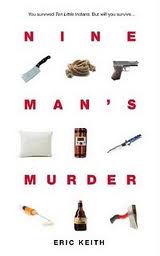 This is a Moment that combines a lot of things. First of all, it will make you laugh. Second, if you like a book that allows you to lock wits with the author–or detective sleuth–look no further than the cover here. And finally, this Moment will surprise you in the end with its poignancy. Eric Keith, in addition to being a masterful puzzle creator, has the unique genius of comedy. Make ‘em laugh, keep ‘em laughing…then stun ‘em with the truth. 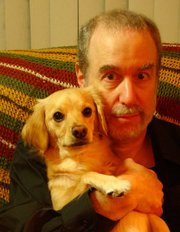 Unlike most authors, my sense of having “made it” did not come from being published.  “Making it” in that sense usually derives from three sources:  money, popularity, or having a readership.

As far as money goes, let me put it this way.  When my publisher paid me for the year the other day, he asked me with an embarrassed cough if I had change for a twenty.

Nor do I welcome popularity.  I don’t like seeing my photograph posted for everyone to stare at—it embarrasses me.  Which is why I don’t even go to the post office any more.

And unlike most authors, I’m not motivated by the prospect of having readers give me positive feedback about my books.  Don’t get me wrong, I have readers:  but one is a hermit, and the other doesn’t even have a telephone.  Although the purpose of writing is, even in my case, to try to entertain people, for me, having a huge following is not an urgent necessity.  Nor, in my case, a likelihood.

This is only to say that, while I would like to reach readers, I am not driven by a need to do so.  To understand why, you’d have to understand a little about me—a task that’s stumped even trained professionals.  My mother says that when I was two years old, she used to place me in a playpen, where I was content to stay all day, without need of human company, never getting bored.  Not once did I try to climb out.  In my defense, my hands were too small to untie the ropes, but this still illustrates my basic self-satisfaction.

My feeling of having made it, therefore, came not when my book, Nine Man’s Murder, was published, but when I first realized I was going to be able to try my hand at writing.  I knew that my life could have easily worked out such that I would not have been blessed with the privilege of getting to spend time doing what I loved.  I imagined what life would have been like if I had never been given the chance to write stories—others have fantasized about that, as well—and I realized that my life would have been empty.  I wouldn’t have lamented not being able to publish; I would have lamented not ever having had the opportunity to write.

That was when I first understood that what I really wanted was not so much to be published, but to write.  And the moment I started writing, I knew I was already realizing my dream.  I had made it.

Although Eric Keith is not an expert in his field, having never murdered anyone nor having ever been murdered (though his wife says he has at times come close), he was formerly a designer of logical games and puzzles for a game company.

He infuses his mystery novels with the same twists and turns of logic that made his puzzles so fiendishly intricate. After years of delighting puzzle solvers with surprises, in NINE MAN’S MURDER he now challenges armchair detectives to match wits with a master criminal–and master puzzle maker.