Hello from the road!

Here we are in Richmond, IN, having only gotten one hour and seventy miles behind in the Plan (you know…that great plan of travel, the most fun of which happens when it gets a little bit lost). Having done this once before now, there are already familiarities to it. The land opening up in Ohio. Road food. The sun setting and my children, who are normally asleep long before, gasping at what the sky can do.

We’ve stopped at four bookstores so far and it’s been wonderful on three counts. 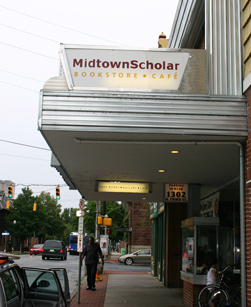 Here are the bookstores we’ve been to in case you’re nearby and looking for a great place to stock up or wile away a few hours. Tell Greg, Jeff, Dana, and Glen (respectively) that I was raving about ‘em.

The Midtown Scholar in Harrisburg, PA–where you can get a delicious snack or cup of coffee while you’re poring over the mixed up jumble of used books

The Whistlestop Bookshop in Carlisle, PA–whose owner has seen an astonishing parade of literary lights, including Edward Albee, Mario Vargos Llosa, and this November, Margaret Atwood, into his gorgeous event space. If you come to see Margaret, look for me–I will be there!

Books-a-Million in Triadelphia, WV–which represents the best a chain bookstore can be: bright, shiny, enormous, and stocked with every book you’ve ever heard of and about a zillion you have not. 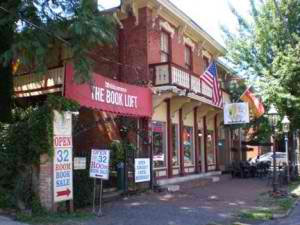 The Book Loft of German Village in Columbus, OH–this might be the most stupendous sight we’ve seen yet on this trip. You enter down a path of uneven brick, with roses overflowing fences, and fountains burbling to the side. Once you get there, you find that ‘there’ is a warren of thirty-two–yes, that’s 32–rooms of books divided roughly by readership and genre. You could get lost in here–and what fun that would be.

Enjoy your travels this summer, everybody, and please keep your emails coming! Already we’ve got new stops to make and new friends to meet.

But no pithy nomenclature for readers of this blog yet.