And now for something completely different. While there may be nothing to do for Borders but mourn, I am happy to say that what we found on the wider bookstore front, traveling cross country, is that things are not only thriving, but proliferating.

I don’t mean that bookstores are opening second–and third–branches, though that is indeed happening. But also that the purpose of bookstores, their role in the community, is becoming more complex and multi-faceted. 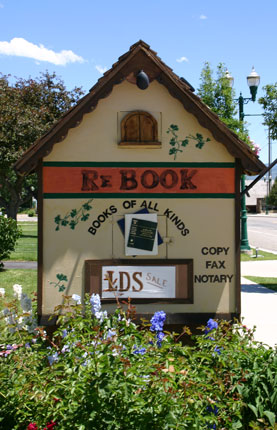 In Midway, Utah, a small gem of a town in which I would love to vacation, a bookseller named Judith runs ReBook. The setting is a turn-of-the-last-century house that’s been added onto at least three times, and Judith has books in all of the additions as well as the house proper. The former kitchen is filled with cookbooks and volumes of cooking lore! It is a truly marvelous place.

Judith told me that not only does she host author events and book clubs, but she also has a mahjong circle, which meets regularly for an ongoing competition in her store. And in this largely LDS community, community meetings are held at–where else? The bookstore.

When a large bookstore recently closed, I was told that its owner hung a sign in the window: Need a bathroom? Try Amazon.

But as a commenter yesterday said on this blog, in order for bookstores to survive, they must do more than offer a clean bathroom.

Amazon has its place, and bookstores have theirs.

Booksellers like Judith–and Whitney and Bruce at Rediscovered Books in Boise; Rachel and Jennifer at The King’s English in Salt Lake City; Paul and Meg at Prairie City Lights in Iowa City; the folks at The Tattered Cover in Denver; Murder by the Book here in Portland (more on these good folks and others to come)–understand this. And they are making their stores into places where people come together over not just a shared love of reading–but a shared love of living. 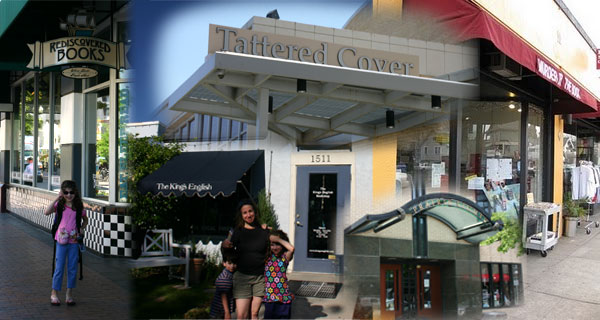 I was corresponding with a writer recently, and he feels that from the number of e readers he sees on planes, plus his sense of the industry, digital reading will vanquish print fairly soon.

My take is a little different. Perhaps Kindles abound on planes–a pretty good use for them, I’d agree, though as you know from yesterday’s post, I travel with books even when they weigh me down some–but bookstores all across the country abound with something else.

Not readers (e or otherwise). People.