May Peace Be With You–and Also You

On this day of memorial and remembrance, I offer sorrow for those who lost loved ones on September 11th, 2001. And I offer humble admiration and thanks to all those people who charged forward instead of back in the act of helping others.

Greenpoint Press is the brain child of my mentor and New York Writers Workshop co-founder, Charles Salzberg, and it has published a book every American–every citizen of the world–has cause to read. Dr. Benjamin Luft collected interviews with many of the 9/11 first responders, interviews which Dr. Luft turned into a book and a film, and which the Smithsonian Institute is now archiving in its permanent collection. 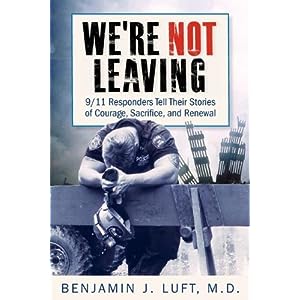 Many of the people who helped on 9/11–the ones who went forward instead of back–are sick with aftereffects now. They carry memories no human being should have to live with.

This is their burden because they showed us the best of what it means to be human.