Made It Moment: M. Louisa Locke 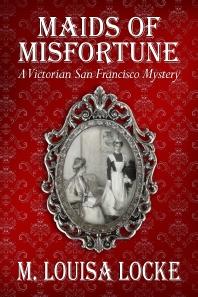 “What happens to a dream deferred? Does it dry up like a raisin in the sun?” Poet Langston Hughes penned those chilling and poignant lines, but in M. Louisa Locke’s case, her deferred dream exploded into e publishing success. For those of you considering both traditional and independent publishing routes, this author’s Moment exposes some real advantages to the latter.

I knew by the time I was twelve I wanted to write historical fiction. By college, however, I had concluded that writing fiction was not a career that I could count on to support myself. So, I concentrated on the historical part of my dream, getting a doctorate in history, challenge enough for a woman in the 1970s. Nevertheless, while writing my dissertation, I came up with the idea for an historical mystery, and, when I had a year off between teaching jobs, I wrote a draft of that mystery. That same year I also got a full-time college teaching job, and again I put the dream of being a writer away. I did periodically make stabs at the traditional publishing route, experiencing most of the disappointments that unpublished authors face, and simply confirmed my belief that my decision to pursue a teaching career had been the right one. Yet, I told everyone that when I retired from teaching I would try again. That time came in 2009 when, after cutting back on my teaching, I pulled out the manuscript for the historical mystery that would become Maids of Misfortune.

However, in 2009 the traditional publishing field was in a slump and new forms of print on demand, ebook, and self-publishing were emerging. I was intrigued and began to research these new opportunities, but I found it difficult to shake the old idea that self-publishing was vanity publishing. Until something happened to me that changed my mind. In June 2009 I attended a mystery conference in LA, where I heard the same old story about how you had to have a “platform” to even get an agent, how first time authors were having difficulty getting contracts, how advances were shrinking, and that the minimum time it would take from first query to finished product was 18 months. Even more discouraging, the editors at this convention made it clear that an author couldn’t expect their work to be published as an ebook for at least another additional year or two, even though ebook sales, unlike traditional books sales, were increasing.

I had an epiphany. I was approaching my sixtieth birthday and I felt too damn old to waste 2-3 years on a process with no guarantee that my book would ever see the light of day or be read by more than a handful of people. And, my research had shown me there was another way.

So I put the business cards away and committed myself to taking the self-publishing route.

I took the next six months to do the final edit and do what was necessary to be ready to publish (get a cover designed, set up an author website, and a blog) and then in a two-week period in December of 2009 I published Maids of Misfortune as an ebook on Smashwords and Kindle and used CreateSpace to publish a POD edition.

My first made it moment came a year later, when I realized I had made enough money with the sales of Maids of Misfortune so that I could retire completely and become a full time writer. My second made it moment came this month when I published my second book, Uneasy Spirits, and I realized if I had decided to go the traditional route in December 2009, my first book would probably not yet be published, much less my second. In addition, that first book would certainly not be available as an ebook (where I have made the bulk of my sales,) so it would be very unlikely that I would have sold the 15,000 copies I have. And finally, without those sales of Maids of Misfortune, the sequel, Uneasy Spirits, would not have become the #1 best-selling historical mystery in Kindle after being out for less than a week. For me, the decision to forgo the traditional route was the best decision I ever made.

For over twenty years, M. Louisa Locke was known by students taking U.S. History classes at San Diego Mesa College as Dr. Locke, an enthusiastic and amusing teller of stories about the past. Now semi-retired, she has taken her story telling in a new direction with the publication of Maids of Misfortune. She is currently living in San Diego with her husband and assorted animals, where she is working on her next novel.