Contest Update: Congratulations to reader Lucy Francis who won a signed copy of Carolyn’s novel A PLACE OF FORGETTING! Thank you all for entering, and here’s to many more giveaways to come! 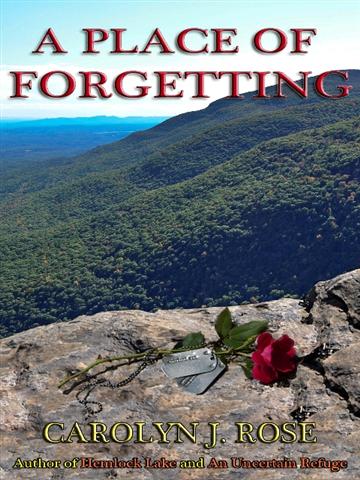 Leave a comment with your own thoughts about how an author depicts genuine feeling between characters, and you’ll be entered to win a copy of Carolyn’s A PLACE OF FORGETTING. This not-a-love-story, not-a-mystery book is something pretty special, crossing genres and appealing to readers who like their emotion real and laid out for the reader to feel. 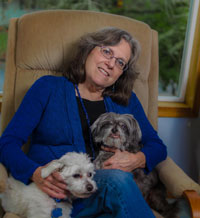 Recently, I looked up from a mystery and said to my husband, “I just don’t feel much chemistry between the protagonist and her love interest.”

Mike, who had read the book a few weeks earlier, frowned. “I did,” he said in an insistent tone.

Now, anyone who’s been in almost any kind of a relationship knows that the other person will sometimes take the opposite view not because he or she has a firm grip on that 180-degree opinion, but for a number of other reasons. Those can be based in the history of the relationship, conflict-riddled events within that history (recent or dredged from the distant past), or the desire to play devil’s advocate, stir things up to break the routine, or just be a pain in the butt for the amusement value of doing that.

Grilled about his statement, Mike seemed sincere about his impression. He stuck to his contention that he felt a chemical reaction—indeed even significant heat—between the characters. I maintained that I’d see more sparks if I struck two slices of bread together in the rain. (Okay, that’s a slight exaggeration, but on a character chemistry scale ranging from icy to sizzling to three-alarm blaze, my needle got no farther than tepid.)

Neither of us would budge. So my choices were 1) to consider that he was misreading, misguided, or missing no opportunity to tweak me, 2) to determine whether I had some prejudice against the characters, 3) to admit that I might have missed something crucial, perhaps while reading too rapidly or in a near-sleep state one step above coma, or 4) to examine the text for evidence to either back up my opinion or change it.

I studied the alternatives presented by this four-tined fork in the literary/emotional road. Choice number 3, admitting to a weakness of my own, seemed, well, weak. Choice number 1, putting the blame on him, seemed like, well, the same old same old. That left me to examine whether I was carrying baggage where these characters were concerned—baggage from previous encounters or baggage based on their backstories. Had I read an earlier book and not liked it? Did one of the characters have a name I loathed? A name of say, a former boyfriend?

So I was down to choice number 4, examining the text for the elements that I feel create chemistry between characters.

First I looked at whether the male character filled a hole in her heart, satisfied a need in her life. It seemed that he did. Then I searched scenes where they were in conflict and found several. Good. I winnowed through the dialogue hunting for witty exchanges. Check. Quite a few of those. I considered their faults and then whether he seemed to have been created simply as a love interest or as a character with other purposes. No problems there. Plenty of faults. Plenty of other reasons for him to exist.

I dug some more. And that’s when I discovered what it was about the male love interest that kept me from seeing him as a satisfying match for the protagonist, a smart, strong-willed woman, capable and independent.

It was mostly a matter of adjectives and verbs and how those descriptive modifiers and action words resonated with me—or in this case, didn’t resonate with me—as a reader/voyeur watching the protagonist and her lover.

But it went deeper than that. I found I also responded to those words as a woman—a woman projecting herself into the role of the female protagonist and imagining herself involved with that man on many levels—intellectually, emotionally, and sexually.

And I just couldn’t see it. He wasn’t my kind of guy.

For one thing, he didn’t have enough bulk, enough physical presence. He was tall and slender. Tall is good. Slender? Not so much. Weighing in right on the line (and sometimes a smidge on the wrong side) of a body mass index number that’s barely acceptable, I gravitate toward clothing that makes me look thinner. Why would I pick a man who would make me look heavier?

And, this male character was enchanted with people and things. That seemed too much like a prince in a never-gonna-happen-to-me fairy tale. I grew up in a practical family populated by carpenters, nurses, and teachers. That could explain why the guys I go for aren’t enchanted or beguiled or enraptured or charmed or intrigued or captivated or delighted or infatuated or dazzled or even fascinated. The guys I go for are hooked, riveted, excited, stimulated, fired up, overwhelmed, or overpowered.

The male love interest walked softly. He may even have danced or skimmed in the course of the story. I want a man who puts his feet down with purpose. I want to know where he is when he’s walking around the house.

I always knew that verbs were important, but now I saw how they burrowed into my mind, linked up with my personal backstory, and formed opinion. Now I saw why the love interests I created for my characters had some heft to them, some degree of earthboundness. (And, yes, my computer insists that isn’t a word, but I’m going with it anyway.)

Pleased with myself for putting in so much effort and thought, I thumbed through the book, citing evidence for my conclusions as I presented them to my husband. “See,” I said when I finished, “you sort of became him when you read this and you felt a connection to her because she’s the kind of woman you like. But I sort of became her and couldn’t connect to him because I’m still me and he’s not what I look for in a man, so I didn’t feel anything between them.”

He glanced up from the TV, considered for a second, and then said, “Well, I still think they had plenty of chemistry.”

What could I do after spending hours thumbing through pages, highlighting phrases (it was a paperback and I owned it), and formulating a theory?

I threw the book at him.

Carolyn J. Rose grew up in New York’s Catskill Mountains, graduated from the University of Arizona, logged two years in Arkansas with Volunteers in Service to America, and spent 25 years as a television news researcher, writer, producer, and assignment editor in Arkansas, New Mexico, Oregon, and Washington. Now getting her quota of stress as a substitute teacher, she lives in Vancouver, Washington, and founded the Vancouver Writers’ Mixers. Her hobbies are reading, gardening, and not cooking. She is the author of a number of novels, including No Substitute for Murder, A Place of Forgetting, An Uncertain Refuge, and Hemlock Lake.

She has also authored five books with Mike Nettleton, her long-suffering husband. He recently released a solo effort, Shotgun Start.