She said/She said: Glimpses from the Magical Mystery Bus Tour

I have been developing a hunch. This could easily turn out to be wrong, of course, but I do have something of a track record with hunches. (No, really. I predicted cupcakes were going to be the next thing when all anybody was eating was big ole slices! And don’t get me started on small plates. Or dim sum. OK, so a lot of my hunches do seem to be food-based).

I’m going to go out on a limb and predict that in the next few years, book events are going to become more important than they ever have been before. Author readings and signings. Multi-author panel discussions. Schmooze over coffee chats. You name it–and get creative. Because the authors and their publicists sure will be.

We live in a world with so much cyber noise that we’re all going deaf. Some days I feel that if I get one more tweet, I’m going to fly away myself. Forget your latest 5 star review. You could tell me in 140 characters that the New York Times raved and I might fail to parse it. There is just. Too. Much. Noise.

But if we’re sitting down together? If I’m settled in a chair, amidst a crowd of fellow book lovers, about to hear a great tale, or share a laugh? And afterwards I might get to shake your hand and have a book signed? Well, then I’m all yours. Instead of staring dumbly at a screen, I’m connected at the human level–and in the end I think that’s what all the cyber noise is aimed at.

Recently Atria, a division of Simon & Schuster, came up with a unique angle on human interaction and enlisted four of their top mystery and suspense authors for it. Take one cool looking bus, put four writers in it, give them a driver and some roadies, and send them from New York to Missouri with stops at some of the best bookstores in the country, and what do you get?

Possibly the future of book-selling.

MJ Rose, who explored the self-publishing frontier the way the first astronauts ventured into space, only to break out with enormous mainstream success, and Liza Marklund, the only Swedish author besides Stiegg Larsson to reach #1 on the NYT list, were kind enough to answer a few questions about their experiences. 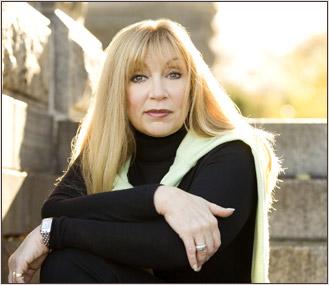 MJ Rose: Trying to avoid getting killed is the hardest parts. No, seriously, suspense writers get their aggressions out on paper. And this trip proves that yet again. No hostility or creepiness. These guys are wonderful, funny and smart. The company is the best part of the bus ride.

Liza Marklund: These English speakers are behaving at their very best – at least verbally. Do not know what they are writing on their endless sessions on their computers, though (we have wireless on the bus, which worked everywhere but in Iowa). Me, on the other hand–I am the only one able to say anything without anyone else knowing the true meaning (I just switch to my native Swedish, hee hee…)

Is McDonalds selling its trillionth burger thanks to this tour, or what are you eating?

MJ Rose: What we do is drive to a bookstore, disembark, go inside, speak for a forty minutes or so, answer questions and then sign books and then step back on the bus. We get lunch on the bus while we drive to our next store where we rinse and repeat, then get back on the bus, drive for a while more, have dinner on the bus and then eventually get to a hotel where we sleep overnight, and then in then in the morning drive to the next store and do it all over again. Some stretches between stores are 2 hours. Some 6. It’s a lot of road.

Sort of like being in a pneumatic tube that’s gone from NYC to Madison CT, to Framingham MA, to Brattleboro VT… you get the idea.

The tour organizers pick chains that are close to the stores so we’ve been getting a lot of menus to pick from places like Cheesecake factory and Chipotle Mexican Grill.

Liza Marklund: Nope. Didn’t see anyone eating a single burger on the bus. Lots of chicken salads, though…

In all seriousness, does this tour seem to be more fun and entertaining than going it alone on a regular tour? For you, the bookstore attendees, or both?

MJ Rose: Being with four other writers is more fun that going alone for sure – the pressure isn’t all on me when we get to the stores. And for sure it’s more entertaining for the attendees. 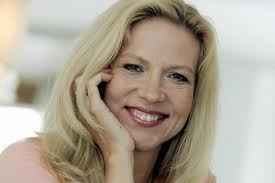 Liza Marklund: We usually don’t tour alone in Europe, at least I don’t. In Sweden, we always go as a whole group of authors from my publishing house, just like we did on the bus. In Germany, there’s normally an actress, a moderator and someone from the PR department along. Normally, we fly or go by train or limousines, but there’s been an occasional bus as well…

I have to say I prefer to go with a whole gang of people, like the bus!

Who first presented this idea to you? The publicist at Atria, your editor, your agent? And how did you react?

MJ Rose: The publicity dept at Atria wrote me and my first reaction was that if the bus didn’t have Wi-Fi, no way would I even consider it. But they did:)

Liza Marklund: I don’t remember, frankly. My agent, I think, and I probably just asked “Can we squeeze it in?”. So we could, and we did, and I’m perfectly happy about it.

How did your families and friends–the people you’ll miss–react?

MJ Rose: With a combo of horror and warnings about what traveling long distances on a bus is like.

Liza Marklund: Well, I’ve done 20 of these in Germany alone the last 13 years, so nobody really gasped…

Can each of you give a brief thumbnail of the career trajectory that got you to this point? Maybe some details your readers wouldn’t already know?

MJ Rose: I don’t think I can get anyone to do that – sorry – at this point we’re all open books!

Liza Marklund: Nobody knows me in the US, so everything about me is probably details they wouldn’t know… What about this one: I’m the only Scandinavian author, except for Stieg Larsson, who’s been no. 1 on the New York Times bestseller list…

Quick–what’s the most embarrassing thing to have happened so far on the bus?

MJ Rose: Well, nothing embarrassing so far but the worst part is we ran out of toilet paper after leaving Vermont and all the places to get more were closed up for the night. Now all the women are carrying emergency rolls.

Liza Marklund: Oh jeez, I’m blushing away here… To use a quote from the bus: I could tell you, but then I’d have to kill you…

Thank you, MJ & Liza, and if you get a chance to see these talented authors or buy their latest releases, I highly recommend you do so! (Next year they’ll probably be on a spaceship).