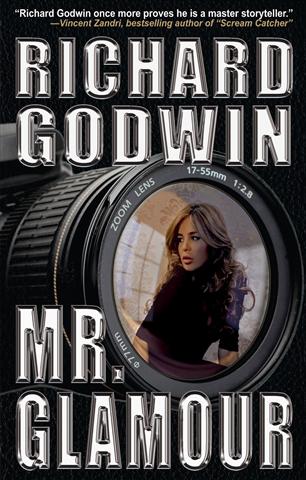 I’m always excited to welcome an author back to the blog, especially when he has become a real friend in the writing world. Richard Godwin hosts one of the deepest interview series I’ve seen on the web, and his Made It Moment appeared here not too long ago. Richard thinks about the world in ways that bone right down to its very core, and this dimension comes through in both his fiction, and his perceptions about the industry. Read on to get a flavor of both.

As my second novel Mr. Glamour makes its way in the world, I am once more reminded it’s a big ocean of literature out there. I have been writing professionally now for two years and started as a produced playwright in London. I write in a range of styles but my crime and horror fiction is what sells.

If I were to give any advice to young or aspiring writers I would say this. Write every day and read the authors who speak to you. Read them and ask yourself how they achieve their effects.

What has being published as a crime and mystery author taught me? For one, the hold the big publishing houses have had on publications has been challenged by Amazon and the rise of the E Book. What do I make of the revolution? I am in favour of it. I used to read reviews and many times bought books based on recommendations only to be disappointed. I often found books by unknown authors which I thought were brilliant. When any industry has a monopoly on taste it inevitably churns out the formulaic and the staid. That for me has nothing to do with why I write.

I write because I love it and because it is a process. You can never reach a ceiling.

This is an exciting time for new writers. I say this as someone who is traditionally published. The E Book has opened the door for many writers to reach an audience. So I say to new writers out there make use of the present time. Find your audience.

Some reviewers are going to hate what you do. If you pay attention to them you will miss out on the point of writing, and that is to find your own audience.

An illustration of the economics behind publishing comes in the form of the recent revelations about price fixing. The Wall Street Journal reports that the Department of Justice plans a suit against five publishers and Apple for colluding to raise the price of electronic books.

It will be interesting to see how this pans out. That kind of tactic doesn’t care for the reader and indicates that profit is driving the bus. But writing is a qualitative enterprise and when an industry attempts to impose quantitative standards on that, things suffer.

My debut novel Apostle Rising did well last year, got great reviews, and sold foreign rights in Europe. I hope Mr. Glamour does as well. It’s about a glamorous world of designer goods, beautiful women and wealthy men and a killer who is watching everyone.  It was released last week by Black Jackal Books and is already picking up great reviews.

Richard Godwin is the author of crime novels Mr. Glamour and Apostle Rising and is a widely published crime and horror writer. Mr. Glamour is his second novel and was published in paperback in April 2012. It is available online at Amazon and at all good retailers. Mr.Glamour is Hannibal Lecter in Gucci. The novel is about a glamorous world obsessed with designer labels with a predator in its midst and has received great reviews.