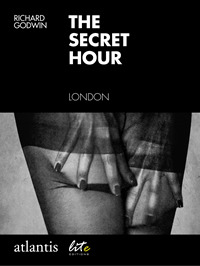 Back for Part II of a Double Feature, is Richard Godwin, wisest man on the web. Richard’s post the other day

contained insight about the two different publishing paths today. While this post delves into another pretty hot topic–can we say, 50 Shades or Why Erotica is So Hot? Best yet, one lucky commenter will win a beautifully wrapped copy of Richard’s earlier crime novel, Mr. Glamour. So dive on in, share your thoughts, and be entered to win!

I blame Paris Tongue, that fiery blonde seducer, the gigolo who meets his lovers in the Secret Hour. He knows all about making it. His success is the cause of the chagrin of many husbands, although it is never his indiscretion that is in question. It seems we are riding the crest of a wave at the moment where erotica is concerned.

When I was contracted by Italian publisher Atlantis to write a Noir erotica novella for their Lite Editions I penned “The Secret Hour”. It centres on a character named Paris Tongue who is proving as popular with the readers as he is with the ladies in my prose.  Now I am sure if you asked my seductive protagonist if he thinks he has made it he would dismiss the notion, since such conceit would deprive him of his appeal, as he seeks new conquests. He would say each women needs to be treated as if she is the only one, and while confidence is key to his character, he would never assume a lady’s virtue was easy picking. He would also waive any contractual obligations to his lovers.  How did he come about?

“He was the bastard child of a killer, and he had survived by trading on his looks and sexual knowing. He’d inherited money from a wealthy uncle at an early age when his exotic fragile mother had fled with an Arab prince to settle in Dubai where after several miscarriages she bled to death one day on an ottoman.”

The premise of Lite Editions is that each novella focuses on a city. “The Secret Hour” is set in London. It describes many of the most beautiful and luxurious parts of London, such as Mayfair and Piccadilly, the locations where Paris carries out his seductions:

“They shopped at Burlington Arcade, ordered there by Lord George Cavendish, on what had been the side garden of his house, reputedly to stop passers by throwing oyster shells over his wall. Paris bought Viola a cashmere cape from Ana Konder….”

The atmosphere of the city imbues Paris’s sexual encounters.

I have now written the sequel, “The Edge Of Desire”, which is set in Paris, suitably, since my hero takes his name from the city. And while the first episode of his sexual adventures sees him seduce the wife of a gangster who is stalking them, the second sees him discover something about himself as he profits from his looks. Paris is about to travel the world, and each city he visits acts as a backdrop to his sexual exploits. Cities all have their own atmospheres, their own sexual natures.

Richard Godwin is the author of crime novels Mr. Glamour and Apostle Rising and is a widely published crime and horror writer. Mr. Glamour is his second novel and was published in paperback in April 2012. It is available online at Amazon and at all good retailers. Mr.Glamour is Hannibal Lecter in Gucci. The novel is about a glamorous world obsessed with designer labels with a predator in its midst and has received great reviews.