Made It Moment: Gloria Alden 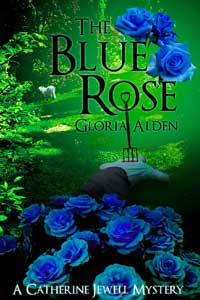 Gloria Alden’s Moment reads like a how-to for emerging mystery writers (thank you, Louise Penny, for the validating and encouraging term). How to find community, how to connect with other writers, how to make the best use of conferences, how to decide between self- and traditional-publishing. And ultimately, how to feel like you’ve made it as a writer. That’s the best how-to of all. 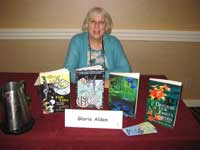 Almost fifteen years ago I started writing my first mystery novel. I had been reading mysteries since I was a young girl so it was a natural this was the type of book I’d write. Because I was teaching full time and also an avid gardener, which filled up much of my spare time in the summer, it was three or four years or maybe more before I finished that first book. I started sending out query letters and with each rejection, I stopped for a while and did some more revision and rewriting then after a few months or so, I’d send another one. Meanwhile, I started on the second in my cozy series with a gardening theme – what else? I continued writing and editing and sending the occasional query letter.

Then in 2006 I read about Malice Domestic and decided to go to this mystery writers/fan convention. I drove from NE Ohio in my little Mercury Tracer wagon with my best friend and two cousins who toured the DC area while I stayed in the hotel and attended my first ever mystery event. I was like the proverbial kid in a candy store; so many interesting panels and so many mystery writers I’d both read as well as some I’d never heard of. There were hundreds of authors, aspiring authors and fans, who just loved a good mystery. I made some friends that year who are still my friends. Some only online, but some I meet in person every year when I return to Malice Domestic in the spring.

It was there I learned about Sisters in Crime and their chapter, the Guppies. I joined both and it changed my writing world. No longer did I feel isolated now that I belonged to a mystery writing community. The Guppy list serve answered questions, gave advice and in general was supportive of both our good news and our bad news. Through the Guppies I’ve taken online writing classes and joined their subchapters like Press Quest, Agent Quest, STORY SUCCESS and it’s where I also got my fantastic critique partners. Now that I belonged to a writing community, I started to feel like a real writer. Almost, that is. I still hadn’t published anything other than poetry.

Then the Guppies decided to put out an anthology of short mystery stories. I hadn’t written a short story since I was a freshman in college, and even though it won an award for a best freshman short story, it wasn’t published. I thought it might be fun to write a short story so I wrote one based on a few characters from my books. It was too long for the word count, and I wasn’t willing to delete enough to meet that, so I wrote another one, “The Professor’s Books,” which was accepted and appeared in Fish Tales, the Guppy anthology right before Malice 2011. When I heard it was accepted, it was almost “my made it moment.” When I finally got my copy of the book in my hands, it was even closer to “my made it moment.” But though family and friends congratulated me, they didn’t really understand the importance of this. So it wasn’t until I went to Malice that year and actually was signing the page in Fish Tales where my story started for people who had the book that I really felt “My made it moment.”

Since then I’ve had five short stories published and another that will be published in October. I won the Love is Murder short story contest for “Cheating on Your Wife Can Get You Killed” which appeared in Crimespree Magazine. I made it into the new Guppy Fish Nets anthology, and an online magazine, Bethlehem Writers Roundtable, but most recently my big thrill was having my first paranormal short story “Once Upon a Gnome” appear in Strangely Funny, an anthology put out by Sarah Glenn, the editor of Mystery and Horror, LLC, a new publishing company. I found their first anthology to be full of great stories and very well edited. I’m so pleased to be one of those accepted. They also accepted my short story, “Norman’s Skeletons” for their anthology coming out in October, “All Hallows’ Evil.” I have found writing stories to be such good fun and rewarding if not financially, at least emotionally.

So what about my gardening mystery series? With much encouragement from my fellow guppies and following those who went indie, I’ve self-published my first two books; The Blue Rose, and Daylilies for Emily’s Garden, and my third, Ladies of the Garden Club should be out some time next month or November at the latest. My made it moments for the books are the praise I’m getting from people who have read both books and are begging for me to hurry and get the next one out.

Gloria Alden taught for twenty years then retired to have more time to write. She enjoyed mysteries since she was a child so it was natural that she would write them. Since gardening is a passion of hers, she wrote THE BLUE ROSE, the first in the Catherine Jewell gardening mystery series. The second one, DAYLILIES FOR EMILY’S GARDEN is out as well. The third in the series, LADIES OF THE GARDEN CLUB will be out sometime in the fall of 2013. She has written a middle-grade mystery, THE SHERLOCK HOLMES DETECTIVE CLUB, short stories (four published and a fifth to come), and many published poems, too.