Made It Moment: E.A. Aymar 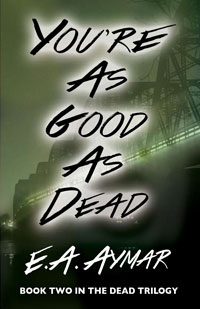 OK, you may not realize this after reading this heartfelt, poignant moment–don’t we all want to roll with the big guys/gals?–but Ed Aymar is also one of the funniest writers I’ve encountered. Read his Washington Independent column monthly. You’ll not only learn a little something, you’ll also laugh, and maybe wince a little in sympathy. (With a third novel about to release, I’ve had a couple of wince-worthy moments.) And then go and check out Ed’s  first and second Dead books. They’re really good. They are, I dare say, fit to roll with the big guys. 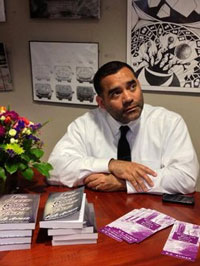 Similar sentiments have been expressed in this space before, but I haven’t made it yet. I’ve definitely had good times since I’ll Sleep When You’re Dead was published, times I’ve treasured, especially since it took a decade and three books to receive that long-sought acceptance letter. You wait that long, and you pass through periods of time when you think you’ll never get published.

It was in one of those periods–after my second novel came close but failed to find a home–that I ended up in grad school. I got a Masters in Literature, got hungry, and started work on a new novel. I really liked this one. It moved well. It was honest. I knew it was good.

The small press movement was flourishing at that time, and my book found a home within those ranks. Getting published was great, but I learned that life with a small publisher isn’t easy, particularly if it’s not with one of the older, established presses. Don’t get me wrong – Black Opal has been a terrific home for my Dead trilogy. But it’s tough to get respect when you’re not rolling with the big guys. Some bookstores close their doors to you. Book festivals are reluctant to feature you. You don’t have the budget to advertise extensively (well, I don’t), or the pull to get your novel into newspapers.

It’s a fight, and a blind one. Some of my marketing and advertising efforts paid off, but I hated the idea that I needed to spend nearly as much time marketing as I did writing. So I just wrote as much as I could: short stories, guest blogs, interviews, anything. My only condition was that I wrote what I wanted, and only what I wanted. I loved it.

One of my pieces was a guest column for the Washington Independent Review of Books, a publication I’d long admired and frequently read, and the managing editor for the site really liked it. We traded e-mails, met at a conference, and she asked if I’d be interested in becoming one of their regular columnists.

Honestly, that was one of my dreams (it’s exactly the kind of nerdy dream a writer has).

I love writing for the Independent. I’m not a prolific writer; both of my novels have taken over a year to write, practically glacial by today’s standards. But I’ve found that an 800-word column each month is doable, and fun, and I’m sharing space with writers I admire, some of the tops in their respective genres. There’s a bustling readership and energy with the Independent that I enjoy and contribute to. I know I haven’t made it yet, and I’ll likely never feel that I have, but I found the right path. That’s enough.

E.A. Aymar’s debut thriller, I’LL SLEEP WHEN YOU’RE DEAD, was published by Black Opal Books in 2013 and the sequel, YOU’RE AS GOOD AS DEAD, is available now from the same publisher. He is a member of the Mystery Writers of America, SinC and the International Thriller Writers. His column, Decisions and Revisions, runs monthly in the Washington Independent Review of Books. He lives with his family just outside of Washington, D.C.